2015 marks the centenary of the Battle of Gallipoli, a significant campaign during the First World War. One allied group that played a major role in the events at Gallipoli is the ANZACS – the Australian and New Zealand Army Corps. Every year on the 25th April, the day that the Battle of Gallipoli began in 1915, the two countries commemorate the events on Anzac Day. The troops were re-formed as the ANZACs while training in the Egyptian desert in late 1914. They were formerly the 1st Australian Division and the New Zealand Australian Division. They went on to help protect the Suez Canal after Turkey’s entry into the war in October 1914.

But it was later, between April 1915 and January 1916, that the ANZAC forces became involved with the Gallipoli Campaign. On the Western Front in France, fighting began to reach a stalemate in late 1914. So the British War Council decided that attacking Germany’s allies could be the best way to defeat her. The attack on Turkey began as a naval operation. But what followed was several failed attempts to enter the Dardanelles, a strait between the Aegean Sea and the Sea of Marmara. Eventually, the British Cabinet agreed that land forces could be used. An international force prepared to land under the command of British General Sir Ian Hamilton. The plan was for a three-pronged landing, which would clear the straits of Turkish defenders. It would then allow the allied forces to head to Constantinople. There, they hoped that the threat of their guns would cause panic and Turkey would surrender. 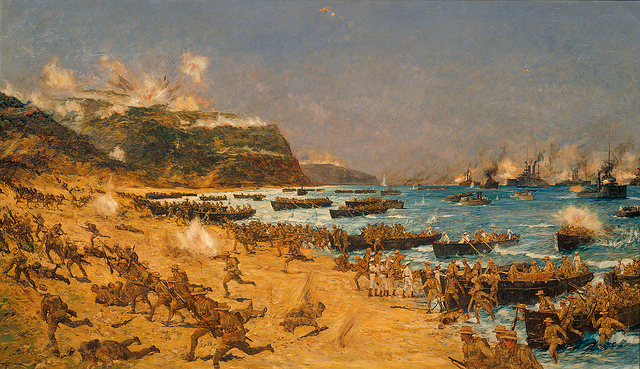 The ANZAC troops landed north of the Gaba Tepe (Anzac Cove) at dawn on the 25th of April 1915. British forces headed to Cape Helles on the Gallipoli Peninsula. It is April 25th when Australia and New Zealand now hold ANZAC celebrations and commemorations. The landings aimed to capture the Turkish forts on the straits, with French forces attacking the Turkish on the Asia Minor side of the Dardanelles as a diversion. They then landed and joined the British to take part of the Helles frontline. Some of the ANZAC forces later joined them, from the Australian and New Zealand Mounted Brigades, who assisted on foot at Anzac Cove. More British corps landed at Suvla Bay in August, north of Anzac Cove, to help in breaking out of the Anzac beachhead.

Despite heroic attempts, the campaign for Gallipoli is considered a failure. By December 1915, plans were drawn to evacuate all forces from the area. They began to leave on December 19th and 20th, with the last British troops leaving Cape Helles by January 8th. Although 142,000 men were evacuated safely, there was no shortage of casualties. It’s hard to determine exact numbers. But Australian casualties may have numbered between 26,000 and 28,000, including more than 8,000 deaths. New Zealand casualties may have amounted to nearly 8,000, with almost 3,000 deaths.

The campaign may have failed, but Gallipoli became a recognizable name in many countries, and united several countries in their adversity.