The University of Oxford is one of the most prestigious universities in the world and the oldest university in the United Kingdom. In the sevenold universities of Great Britain and Ireland, Oxford takes first place.

History of University of Oxford

The exact date of the foundation of the ancient university of the United Kingdom is unknown, however, the first mention of the activity of the university belongs to 1096. Since 1167, the walls of University of Oxford again began to be attended by the bright minds of England, as King Henry II ordered English students to drop out of school in French universities and return to their native lands. 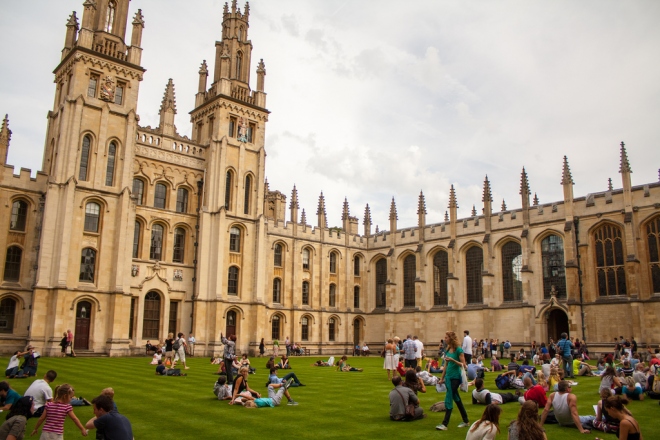 Initially, Oxford University occupied not a big territory, and mostly monks studied there. However, from the end of the 13th century, religious colleges and communities began to be formed at the university. Then, until the 18th century, the University of Oxford was dragged in a variety of political and religious disputes, without stopping educational activities and losing its status as one of the foremost universities in the world.

Until the 19th century, the University of Oxford taught mostly exact sciences.Then the program included a number of humanitarian disciplines, and a medical faculty was opened that today is considered one of the best in the world. This five paragraph essay will tell you more about the history of the university.

The Construction and Infrastructure of the University of Oxford

The University of Oxford has a fairly extensive territory –over 28 hectares of parkland and forest, which is very impressive. Most of the university’s colleges are in the center of the city or not far from it, so the university buildings have to side with cultural monuments, shops, pubs,cafes, and restaurants.

In addition to entertainment facilities, there are several churcheson the territory of the university, as well as the Sheldonian Theater, over a hundred libraries and museums. In addition, the University of Oxford has its publishing house. Among the buildings of the university’s colleges, there are an arboretum and the oldest botanical garden in England. It is noteworthy that the classrooms and dining rooms of some colleges are shown in a series of films about the young wizard Harry Potter.

In the campus there is an incredible atmosphere – medieval architecture, small parks with labyrinths made of trees andbushes, evergreen lawns, majestic campus and chapel buildings – allthis magnificence attracts over 9 million tourists a year.

Faculties of University of Oxford

Despite the fact that today the University of Oxford is more focused on the training of humanitarians, social, exact, and medical sciences, along with jurisprudence and banking are also taught at a high level.

The University is a small country with 38 colleges and 6 private educational institutions (Permanent Private Hall). The difference between these two structures is the number of students, the daily schedule, the charter and the subjects studied. PPH is supported by various religious organizations.

In colleges of the University of Oxford, there is nospecializationdivision, that is, a student of any of the 38 colleges can study at any faculty. The university provides training in virtually all possible areas and specialties for bachelor’s degree. The master’s program includes everything but accounting.

Scientific achievements of University of Oxford

Some of the scientific achievements of University of Oxford include:

Why is it worth entering the University of Oxford?

The system of study at the University of Oxford involves the use of the system of tutoring when each student has a mentor from among the teachers. The curator develops an individual training program in accordance with the personal abilities and qualities of the student.

The University of Oxford received the Royal University award nine times – more than any other university in England.

The University of Oxford has a huge system of campuses. Students have the opportunity to live in the student residence, as well as in individual apartments.

TheUniversity can be proud of its graduates, among them are 40 Nobel laureates, 6 kings, 25 British Prime Ministers, 12 saints, and over a hundred of world politicians.

The students can spend their free time at elective classes or in interest groups, which are at least 300 in the university. There are clubs for lovers of literature, foreign languages, sports disciplines, and so on.

In Oxford, special attention is paid to sports activities, so university students participate in competitions in basketball, football,baseball, rowing (in conjunction with students at Cambridge University),and other kinds of competitions.

For sports enthusiasts, the University has a fitness room, cricket and ice hockey facilities, as well asa few tennis courts, 15 fields for playing baseball or football, a 25-meter pool, and a gym.

Oxford owns the largest in the library system in the country– morethan one and a half hundred, in the campuses of the University are also locateda botanical garden anda few museums.

The university has a Career Service that helps graduates find employment in the most successful companies around the world.

The center of student leisure organizes excursions to other cities, games, and dances for students every weekend.

Oxford spends about 7 million pounds sterling for financial aid to students. There are no budget places at this university, but scholarships received by students can fully cover the costs of training.

The university accepts applications for admission from applicants with disabilities and presents to them the same strict academic requirements as to other participants in the introductory campaign, but with some amendments concerning full-time attendance.